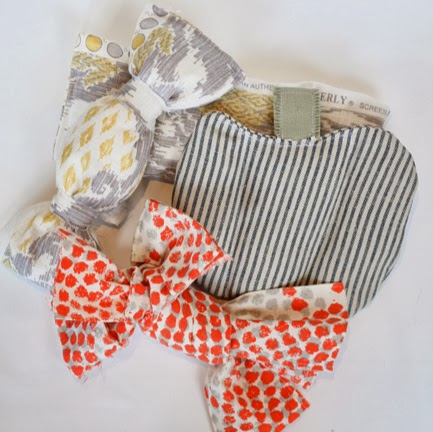 I've never met a dog that loves toys as much as our dog, Jackson does. He'll tirelessly fetch them, gnaw on them, and play tug-o-war with them while growling threateningly and wagging his tail at the same time. He even cuddles with them. See? 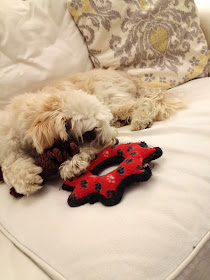 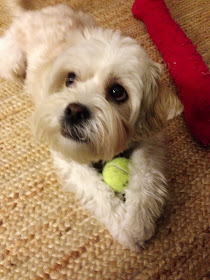 He gets so much joy out of them. It's hilarious to watch. He also has a habit of breaking them open and scattering all the stuffing all over the place, which means toys need to be thrown out more often than I'd like. Buying new ones can be expensive - especially good quality ones. So I decided to make some of my own in an attempt to use up some more of the fabric remnants I have on hand (I used some for my ruffle wreath earlier this week!) and save us some dollars. 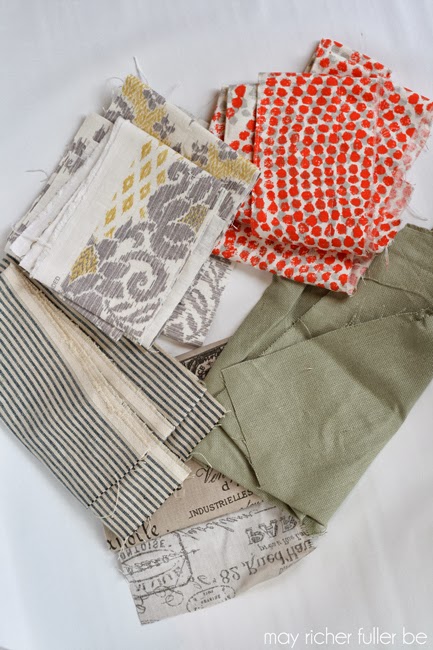 I didn't really plan anything out. I just went at it with my sewing machine and some creativity :). I made four toys, and plan on stashing them all away and pulling one out at a time as Jackson goes through them. If you have a sewing machine and pup that need some new toys, this is a GREAT beginner project. You can't really mess up dog toys. And even if you do, guess what? No one will care!

The first one I made was a pumpkin - or maybe an apple depending on how you look at it, ha!

I folded a piece of this ticking stripe fabric in half (so I'd have two identical pieces) and cut out a pumpkin-like shape. I also cut out a small rectangular piece of green fabric for a stem. 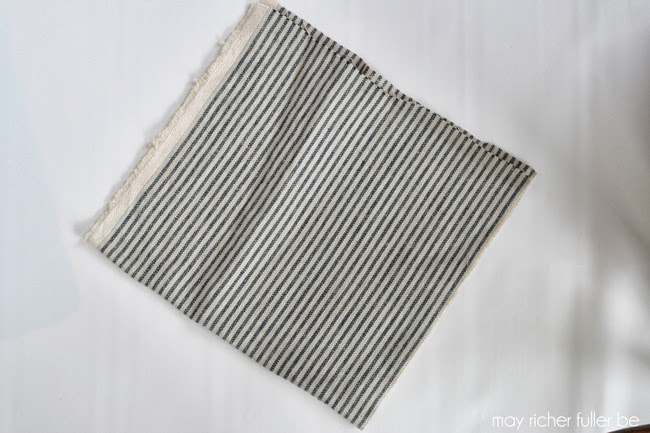 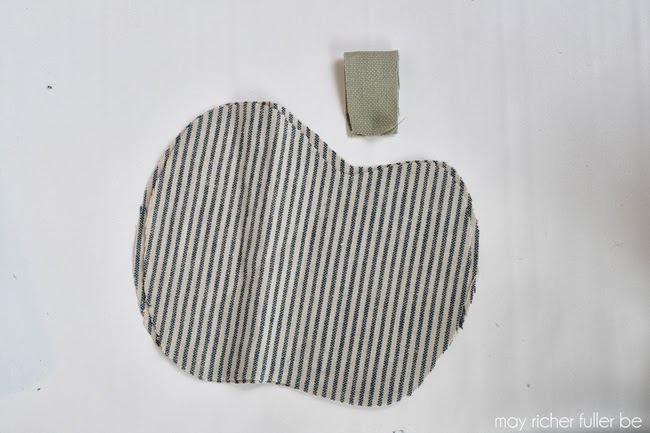 Then I just sewed around the edge about 90% of the way, leaving a small opening so that I could turn the fabric right side in, stuff it, and sew the opening shut. 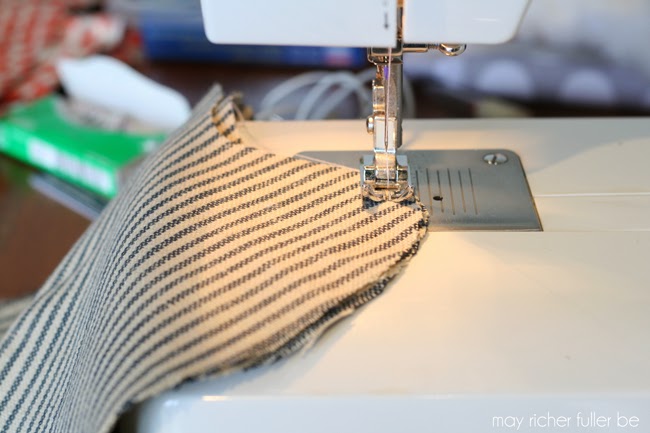 For the stem, I folded the small piece of fabric in half and sewed around its edges to make it a little heftier. 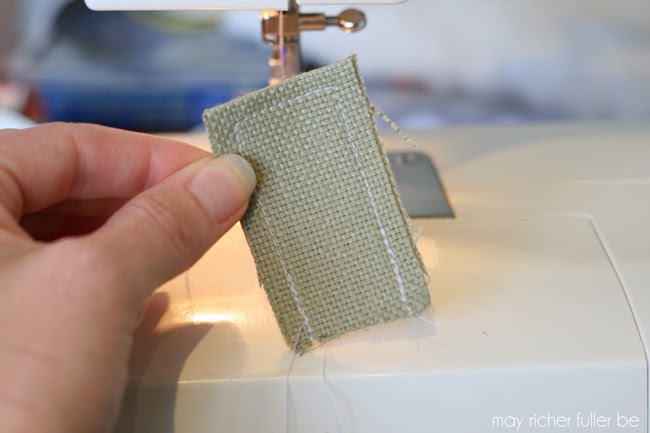 Then I tucked it just inside the top part of the pumpkin as I was sewing the last part of it shut.

After I stuffed it using some leftover polyester batting I had from another project and sewed it shut, I sewed two lines down the pumpkin, which gave it some dimension. 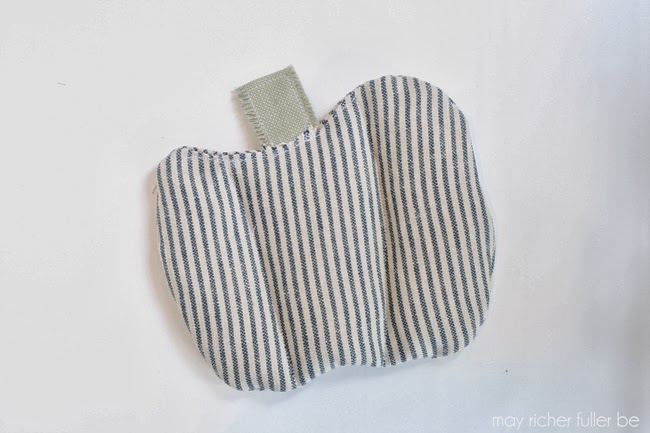 And there you have a fall-themed dog toy!

For two of the toys, I sewed and stuffed two simple rectangle-shapes using the edges of some leftover fabric from a pillow project. See how you can still see the name of the fabric company (Waverly) and other info on the edge? This is a great use for that kind of scrap. I'll bet your dog could care less that you used that part of the fabric :).

One looks like a piece of wrapped candy and the other is...well...just a rectangle with two lines sewn down it. Real creative, huh? 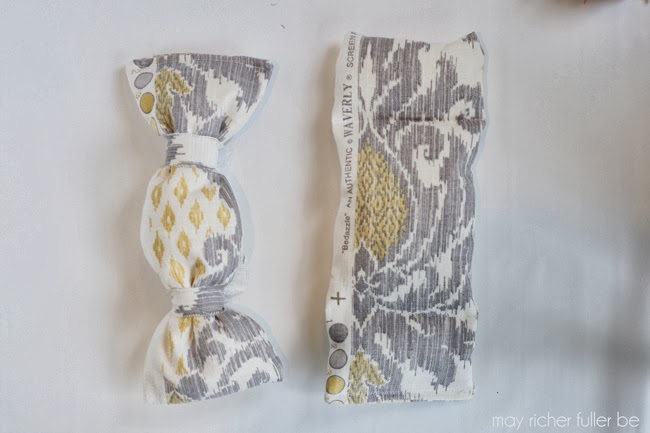 For the last - and easiest - toy, I took a long piece of fabric leftover from the curtain panel I used to make my upholstered headboard, cut it into three pieces and tied them in a knot. No sewing involved in this one. It took about two whole seconds. So even if you don't sew, you can still make your dog a toy! Hooray! 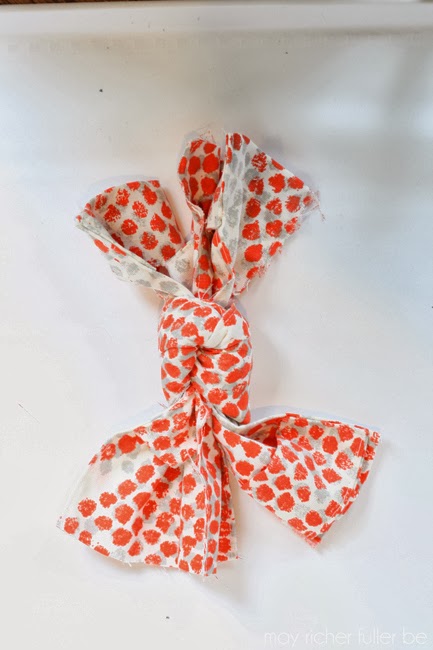 I already gave Jackson this last toy, and let me tell you, he loves it. He might even stop by the blog and tell you about it since he does commandeer the blog every now and again :).

Read the series from the beginning... 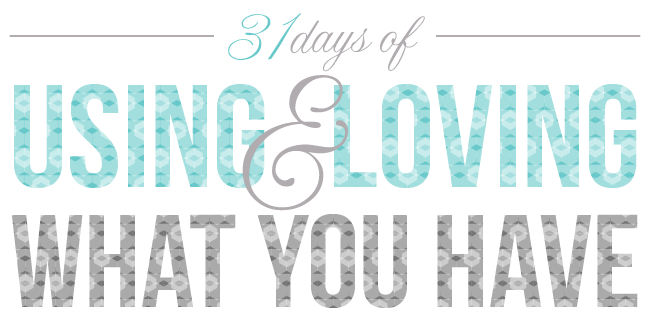 If you enjoyed this post, have a question, or just want to say hey, please leave a comment! I read each comment and love to respond (usually by email), so check your inbox if you don't see a response below!